A Typical Week in our Life

Last week our home church in the States asked us to do a week of daily postings on Facebook sharing what a week in our life is like here in Northern Uganda. It was so much fun to take pictures throughout the day that people might be interested to see and document what we did in a week. So I thought it would be fun to share the same photos and stories here on our blog.
The first photo shows that traveling has become a big part of our lives as this is Isaac's first year at Rift Valley Academy, a school for missionary kids in Kenya. Every 6 weeks we drive to the capital city to either pick Isaac up for his month long break at home, or for his mid term break which is 6 weeks into his 3 month term. We're so thankful that we now live somewhere close enough to see Isaac this often!!! It is worth all the miles we trek in our car!

Until today, this is how I've been doing laundry. City water doesn't come very often so we depend on our rain barrel a lot. We have a washing machine that runs off our solar power but I try to use as much rain water as possible to save what's in the main tank for the taps, showers, and toilets inside.
I said until today, because Eli figured out a way to install a pump to pump water from the rain barrel up to our main tank so we should be good for water now. Yay!


This is what I spend most of my week doing: home schooling these two amazing boys.  We have tried to get on Isaac's school schedule so that we can take off of school when Isaac's home and work hard when he's working hard at school too.

Although Eli's favorite thing to do is teach, since he is running the ministries alone (without teammates), he also has a lot of admin - budget, emails, phone calls, ordering books, grading papers, etc.) He usually spends the mornings in his office and then goes out to the refugee camps or has meetings in the afternoon.
Eli also really enjoys conversations with pastors and church leaders sitting under our mango tree.

One of Evan's 13 "Tasks of Manhood" that we gave him on his birthday in March was to completely take a part and put back together a motorcycle. Eli found an old, cheap moped and Evan and his friends have been loving taking it apart and learning mechanics as they go. When Evan gets stuck, Eli jumps in to help. 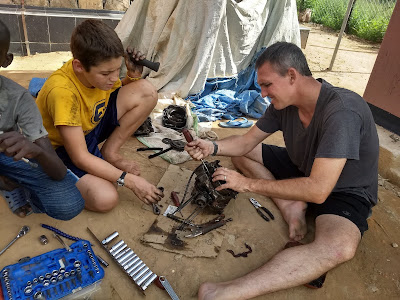 After a full morning of school, the boys and I all take off out of the compound. They go off and play with their friends and I do the same thing. :) Most women do their hard work in the mornings like working in the garden, washing laundry and cooking. Then they just kind of hang out in the afternoons. When Carson wakes up from his afternoon nap, he and I head out to greet and visit different neighbor friends. Sometimes we stay close to home, other times we might go to visit a friend who just had a new baby or we try to go meet someone new. 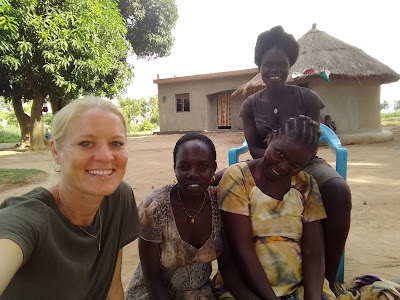 Carson is quite popular in our village. He doesn't always love being held by everyone but they all sure love him. His name is hard to pronounce so he goes by John which is his middle name. I've even been in town and people know his name!


De-de means Grandma in Maadi language. This is De-de Grace and she is our village grandmother.


We don't want Evan to lose what he worked so hard to learn last year with the trombone so we do music class twice a week. Eli played the trombone in high school and college so he is helping Evan learn some new songs (another one of Evan's 13 tasks.)


Eli is running 4 different TEE (Theological Education by Extension) programs in and around Adjumani and in refugee camps. The way the program works is that the students read their books on their own during the week (around their regular jobs) and then they meet on Saturdays with a facilitator/teacher to review and discuss the material. They also have to write papers and take tests as part of the program. 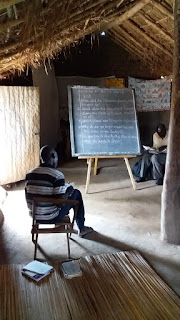 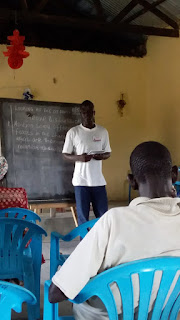 Though it's still very hot and muggy and the rains haven't picked up like they should in this season, everyone is planting, including me! I've planted a vegetable garden, an herb and lettuce patch and lots of flowers! Hopefully we'll even get some grass growing here pretty soon! 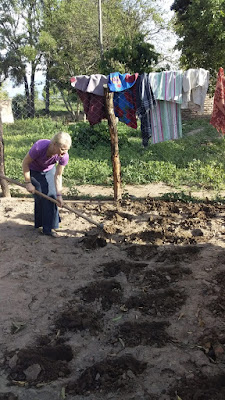 An update on Isaac: for those who don't know, at the beginning of May Isaac broke his arm up near his shoulder while playing rugby at school. He has to keep it immobile and in a sling for 6 weeks. Eli and Evan took a 2 day journey to visit him at school and make sure he was doing alright learning how to do everything one handed. He has been so brave and had such a good attitude through all of this. We are so thankful to the Lord for giving Isaac this special strength and stamina, especially with us being so far away. We also thank God for Isaac's dorm parents and friends who have taken such good care of him. This picture was taken by a close friend whose son also goes to school there (seated in blue next to Isaac). She just went for the weekend and took some treats and love to our boy and sent us lots of good photos and videos of how Isaac is doing. The day after Isaac was injured another friend/guardian of Isaac while he's at school drove from Nairobi to spend a few hours with Isaac and then another friend just sent him a little care package. So Isaac's getting an outpouring of love and that's been a very big help - not only for Isaac but for us too.

Bethany, what fun to see what your week looks like! I've always wondered this too. Of course, it's funny how similar our weeks look - you in Africa and me in America. Schooling, cooking, friends, learning and teaching about Jesus. Yes how very different our week looks at the same time! May God bless you this week!

BTW, how nice that you'll be so close to Anna when she attends RVA!

We are independent company Offering Loan at a cheapest interest(2%). We guarantee any kind of Loan, Government finance Project and Investor Project. etc If you are interested Kindly get back to me for more information via Email: collinsguzmanfundings@gmail.com