When NOT in America for Christmas 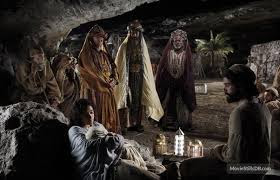 The other day I was in my kitchen cooking breakfast while Christmas music played in the background. When the song "Here with Us" came on, I suddenly found myself in a full blown worship session as I was flipping french toast. The words of this song stirred me so deeply as God reminded me that He is here with us.

I also couldn't help but be thankful for a Christmas season here in Uganda where there isn't all the hype and distractions that come with Christmas in my home country. There was no crazy Black Friday shopping, no Santas, and no pressure to have the most beautifully decorated house or cookies. I'm not saying there's anything wrong with those things. But those things can detract from what Christmas is truly all about.
Instead, this year, all we have is a simple Christmas tree and Advent Calendar. For our Advent reminder each day we have a reading we're doing together every morning after breakfast and then in the little box is a piece of paper that has a family Christmas activity to do for the day. Some examples are: bake Christmas cookies, sing Christmas carols by candlelight, or drink hot cocoa while sharing past Christmas memories. 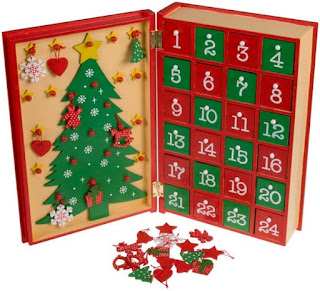 Please understand. I'm not trying to say our Christmas "traditions" are better than anyone else's. But I've had several American friends tell me this Christmas that they're jealous of me because I'm not caught up in the chaos and flurry of the Christmas season. And it hit me. So often missionaries really struggle during Christmas time because they miss the snow and cold weather, or the Christmas shopping and of course the family. And yes we do miss our family and friends especially deeply during this season. BUT what a special gift to be able to focus on the TRUE MEANING of Christmas and marinate in that rather than all the hustle and bustle.

Here with us
Posted by Faders at 7:52 AM No comments:

My Trip home from South Sudan

I recently traveled to South Sudan to visit the Theological Education by Extension program that is going on there.  I was impressed at the persistence of the many students and teachers who have endured significant difficulties and kept pushing forward with their studies.  Here's an example of one of the challenges: the area I visited was flooded in October and everyone's homes were knee deep in water.  Imagine waking up one morning and finding water coming in through your doorway!  It was strange to see all the huts stripped of their mud near the ground.  The flooded river had washed the bottom couple feet away and left just the sticks.  Wow, some people are so resilient.  I finished the evaluation that I had come to do and was trying to get from Mabaan, South Sudan to my family in Adjumani, Uganda in one day.  It was a little bit more of an adventure than I anticipated. 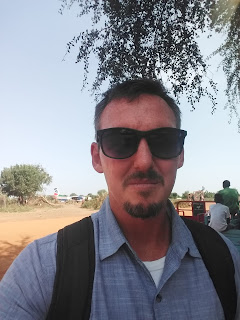 Ok, the moustache.  I know it looks awful but every November is my one opportunity to let it grow and join the thousands of No-Shave-November gentlemen around the world.  The first step of my journey was boarding an old Russian Antinov cargo plane from Mabaan down to Juba.  After a cup of tea with missionary Jono Stanley at the airstrip, I intrepidly boarded the plane with 3 other passengers. 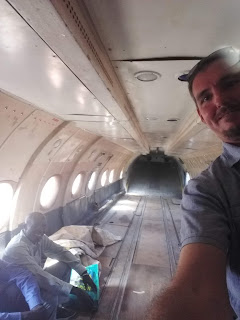 Notice anything missing?  No seats and no heat.  I wasn't sure how to sit and when the pilot accelerated, I found myself grabbing for anything to keep myself upright.  Not much to grab.  It was extremely loud so the 3 other passengers and I simply smiled at each other.  Perhaps someone can explain this to me but when we started our descent, water vapor started coming out of the ceiling of the plane and little droplets fell onto us.  That was weird.  I admit that I prayed a lot during the flight.

I landed safely in Juba (fastest time ever for me) and hopped into a packed taxi.  The only seat that was available was the a make-shift seat between the driver and the passenger.  It was a van and they had built a little wooden box and placed an old throw pillow on top of it.  I spent most of my journey lifting myself on the armrests of the driver and passenger because my rear end was so soar. 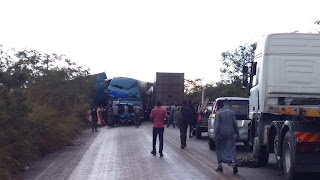 And then this happened.  We were climbing a hill, about 5 miles from the border of South Sudan and Uganda and found 5 large trucks smashed together.  They were completely blocking the road.  I am not sure how the accident happened but thankfully no one was killed.  There was diesel fuel running down the road so I grabbed my bag out of the taxi and climbed through the wreckage to get to the top of the hill.  No cars were getting through so I started looking around for a way to get to my destination 5 miles away. 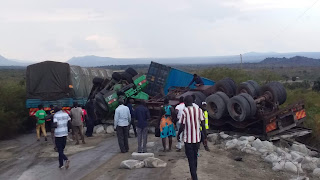 A soldier saw me looking around and asked me where I was going.  I told him, "Nimule" and he motioned me to a vehicle that had come from the other direction.  There were some people in the vehicle from a telecom company.  I squeezed in the back and off we went!

I crossed the border of South Sudan into Uganda and looked around for a taxi that was headed to Adjumani (1 hour away). There was one guy sitting in a car but he was sipping on a beer.  Hmm.  How badly did I want to get home?  Good enough, as we started talking another guy came up to the car and got in the driver seat.  He agreed to go to Adjumani right away with the one other passenger.  He drove ten feet and got out of the car and another driver got in.  No idea what is going on but was really looking forward to getting home at this point.

It had been raining a lot so the roads were muddy.  We came to a particularly muddy part of the road where a small sedan sat stuck in the mud but off to one side of the road.  The owner was out of his car looking at the sticky situation he had found himself in.  Our driver revved his engine and crashed through the mud, effectively giving the stuck vehicle and its owner a solid brown bath.  Our driver sped away while the other passenger and I protested that we needed to stop.  He just kept on driving. 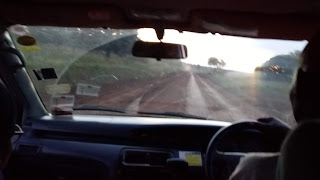 About five minutes later the small sedan came tearing down the road, caught up with us, and then passed us.  We met again a few minutes later.  He had parked himself by the police checkpoint and they forced our driver to stop.  Our car was turned off and the keys removed by the police officer.  The other passenger and I debated our options, decided to wait it out, and settled into a conversation about marriage in the Ugandan context.  I found out my fellow passenger speaks 7 languages.  Incredible.  After a few minutes, the driver returned and off we went. He apologized for his mistake.
Thirty minutes later we pulled into Adjumani town and I hopped onto a motorcycle taxi that took me directly to our gate.  "I know where you live," the driver said, "you have the white kids!"  Within a few minutes I was back in the embrace of my family.  PHEW!!  It is GOOD to be home.
Posted by Faders at 10:01 PM 4 comments: