Not your typical school 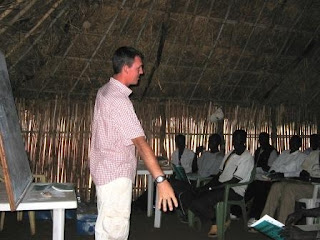 We are not your typical school. Most of my third graders are married and with children. We are doing something called an accelerated learning program so we teach two grades every year. Last year these students completed first and second grade and this year they will finish third and fourth. We will take them through 8th grade. I am in charge of teaching science and Christian education. We are working our way through the Gospel of Mark for Christian education and just finished a competition on who could make the strongest compressed dirt block for science.
Here is a picture of Stephen and Jonah with their prize. The blocks are all lined up and drying. I think I'll drive the truck over them to see which one is the strongest. Who said school isn't fun?! 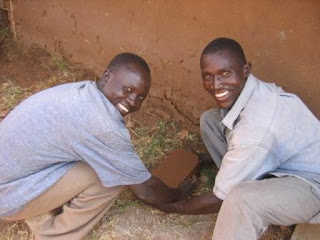 The Beginning of the Bridge 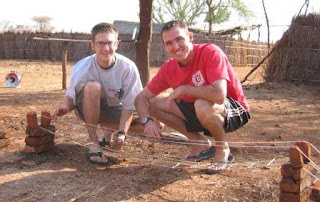 Phil and I go way back. Trombone buddies was how it all began, actually. We went to high school together in Kijabe, Kenya and played trombone in our school band and Jazz band. Who knew that ten years later he would volunteer his time to be the head engineer for a bridge that we desperately need in Yabus? The two weeks he just spent with us in early February flew by as we surveyed potential sites, found one, and began putting stakes in the ground to begin digging.

One of our main concerns is that no one has ever seen a bridge like this before. It's a bit like getting on an airplane when you had never seen one before. Not exactly something you think is a good idea. Phil addressed this issue by making a model out of bricks we had lying around, some string, and pieces of bamboo. Hopefully this will help ease people's minds. We'll see.

The plans are drawn, the site picked out, and the Phil is willing to come back when we get approval for the bridge. Please pray with us that this bridge will get approval from the government and be embraced by the community.
Posted by Faders at 1:39 AM 1 comment: