Such a time of Thanksgiving!


After the serious part of the program, Eli organized a bunch of fun games that had everyone laughing so hard they could hardly compete! 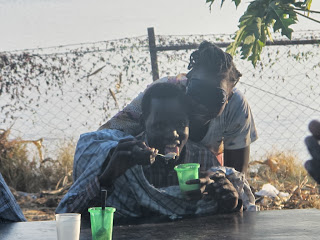 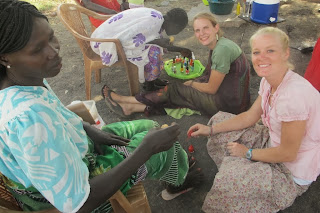 On Thursday afternoon my teammate Amie organized a special tea/coffee time with the student wives where we also affirmed each of them in the group, drank coffee, laughed, and painted their nails to look pretty for graduation. 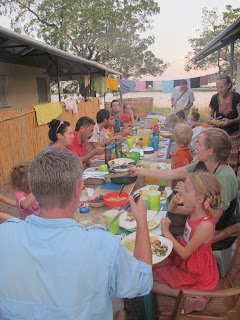 Then at 6 pm we had a giant Thanksgiving meal as a team, potluck style. The menu was: a tiny chicken, mashed potatoes and gravy, stuffing, crescent rolls, jello salad, green bean casserole, festive pumpkin hummus, cranberry sauce, and pumpkin pies for dessert.  We could hardly walk home after that!

Our week of Thanksgiving will continue as we celebrate GRADUATION tomorrow with these amazing students. It will be a bittersweet time as we applaud and celebrate their accomplishment but also have to see them all go.
Posted by Faders at 9:56 PM No comments: 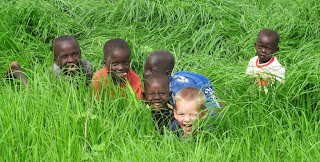 Lots of processing going on in my heart these days. With graduation only a week away, the time has come to release these precious families to go back to their home towns and villages to continue in the ministry God has called each of them to. We have been here in Melut for 18 months and I never could have dreamed that we could love people so deeply in such a short period of time!

As a mother of a 5, 7 and 9 year old I have been praying about how to help my children through more goodbyes. I remember June 2012 when we first arrived in Melut and our boys were super shy with the 50 children who lived on campus. But it didn't take long before they joined the crew of boys who play from sunrise to sunset. Fishing, wrestling in the grass, swimming in the Nile, building things out of mud, planting their own vegetable gardens, building forts - you name it, they've done it! 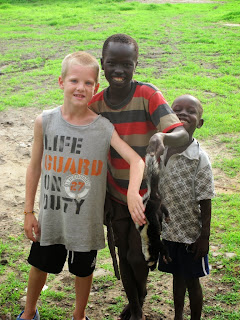 We started talking with our boys about these upcoming goodbyes a few weeks ago. We told them about graduation and that it meant that their friends would be returning to their homes with their parents. I'm still not sure how to read boys' emotions. :) They seemed to just accept it and get back to playing. But I've noticed in the last week that my older two, but especially my oldest has been drawing back. He's been spending more time inside playing than being out with his friends. I have reminded him a few times that he should play with his friends as much as possible while they're here but he seemed to always come up with an excuse to stay inside (it was too hot, or his friends were teasing him, etc.)

Eli and I were talking about this the other night before bed and my husband had the great idea to plan a fun kids night on Friday night. I don't know where he gets this type of energy with how busy his weeks are but he moved forward and talked to all the parents on campus to get permission for the kids to watch a movie on the projector up in the school building and then for the boys to have a sleepover in the classroom! Mission accomplished. From our house I could hear laughing and squeals of fun for several hours. Finally around 10 pm the noise seemed to die down so I assumed Eli was getting them all in bed (I had a nice quiet night at home to myself.)

Then I heard a knock at the door. It was my oldest son saying he wanted to sleep at home. I asked him why. Then I asked if he was sure. I didn't want to push it too hard so I tucked him into bed. About 15 minutes later he came into my room and said he'd changed his mind and decided to go back up to join the sleepover. And then he burst into tears.

Mothers of MKs out there - I know you know that feeling of your mother's heart breaking. I gathered my big boy into my arms and rubbed his back and told him I understood how hard it was. Between sobs he asked, "Why do they have to go Mom? Why?" I encouraged him that God has always provided him with special friends everywhere we go. I reminded him of other difficult goodbyes he's had to say in the past. And I told him that I knew God would give him new friends. I held him until his crying subsided and then walked him to the door.

At 7 this morning I woke up to the sounds of all the boys laughing and goofing off around a campfire Eli built in the cool of the morning. They were back to having fun and I could hear my oldest son telling someone something in his beautifully pronounced Arabic. My heart swelled and in that moment I knew he was going to be alright. 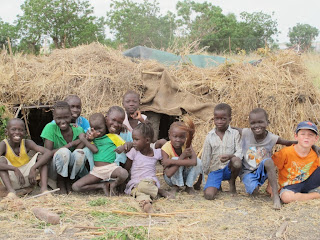 The goodbyes will be hard during these next few weeks. Please pray for our family as we let go of these beautiful people who are so dear to us.
Posted by Faders at 4:22 PM 2 comments:

With graduation a week from today, you can imagine how busy life is. But I'm so thankful we could get away as a family for a few hours this morning to our favorite picnic spot. The boys explored and climbed trees then we ate lunch and played a game of Ticket to Ride. I think that will fuel us for the week ahead. 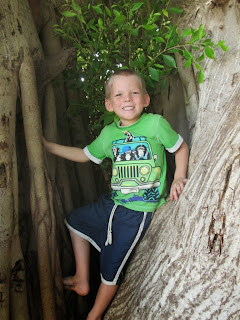 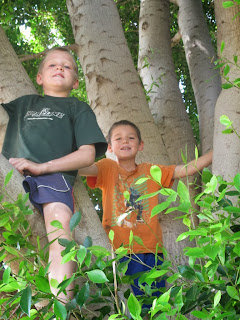 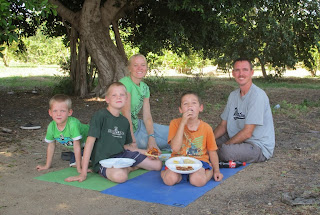 Posted by Faders at 4:03 PM No comments:


Every now and then I pause to think about the differences of my life here in South Sudan and what it would be like were I back in the States. With the holiday season upon us, I would definitely be in baking mode but probably baking batches of cookies with my boys or on my own. I've noticed more this year than I have in years past that during the holiday season here, I am doing my baking with friends.

Last weekend I baked two cakes for our dear friend Eliza's son's birthday. Some of the boys at that party went home and told their mom about the cake and said they wanted it at their birthday too (this boy's birthday was on Wed.) I told Eliza I would be happy to show her friends how to bake cake so they could do it on their own in the future and even offer to bake cakes for other friends and neighbors. So on Wednesday afternoon the three ladies came over and we mixed up two cakes together and baked them in my oven. The ladies mixed up the third cake all on their own and it turned out just like the others! They were so excited with this new skill that they invited the boys and I to come later for the festivities. 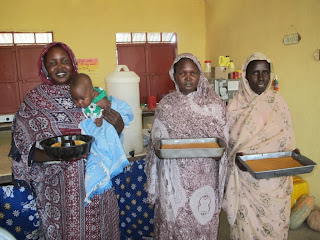 This birthday party was one of the most meaningful birthday parties I've ever been to. The birthday boy was turning 6 and when his mother gave a welcome speech to all the guests she shared that she'd lost children before so she decided a few years back to have a special time of prayer and thanks to the Lord every year on her childrens' birthdays. It was a sweet time of singing, encouraging and speaking blessings over the family and birthday boy and then praying together. After the "service" we enjoyed cake, zalabia (doughnuts) and tea. I am thankful for the opportunity this has given us to build new friendships with women off campus.
Posted by Faders at 3:51 PM 1 comment: 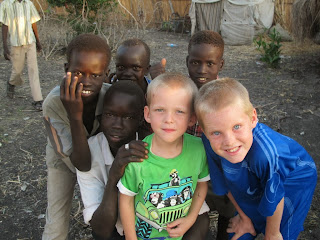 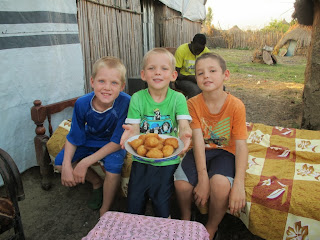 No matter how long I live here, I am always amazed at our friends' hospitality. They welcome us with open arms as one of them. We are so deeply grateful.
Posted by Faders at 12:19 AM 1 comment:


The holiday we at Gideon Theological College are celebrating, or at least preparing to celebrate, is GRADUATION! The graduation for our students who have worked so hard these four years earning their college degree has finally arrived. November 30th is Graduation Day so preparations have already begun on campus: song rehearsals, meetings, food/feast prep, campus cleaning, etc. Today a group of women from our church came to help bake a very large batch of khabiiz (special Sudanese cookies). 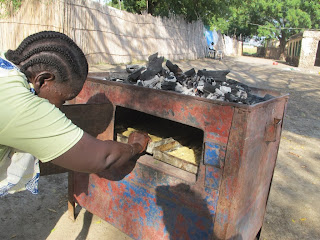 Outside three different charcoal ovens had their coals stoked and ready. Each batch of cookies only took several minutes since it was so hot!

These types of projects are always so much fun because the ladies joke around, tell stories and drink coffee while they work so it's really just a fun party!
Posted by Faders at 11:31 PM No comments:

A Highlight of the year for Bethany

Tuesday was a very special day for the women here at Gideon Theological College in Melut, me included! It was the last of our Tuesday afternoon classes taught by Claire Meckler. For several semesters Claire taught a community health class and this semester she did a course on Healing the Wounds of Trauma. To bring the class to a close, we showed the Magdalena film, which is a version of the Jesus film but geared towards the women. Claire encouraged each woman to invite two friends from off campus to come. We had a great turnout. 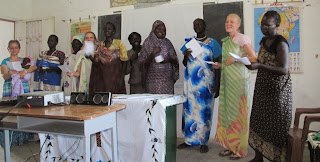 To surprise and thank Claire for all she's done, the women composed two special songs to sing for her as a farewell (Claire is heading on home assignment in a few weeks.) They also included Karen in the songs who is also leaving next month. 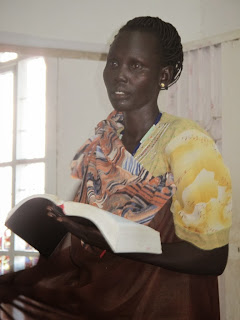 Mary, one of the student wives, shared briefly from Matthew 13:23, the parable of the seed that falls on good soil. She likened the group of women to good soil that will yield a good harvest. 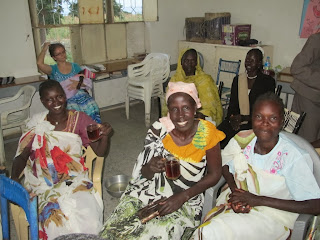 After the program the women served juice, tea, and doughnuts to their friends who had come.