A friend of ours called us on Thursday to invite us to an Uduk church wedding for her nephew. This was a significant event because it was the first church wedding in this tribe since they fled to Mabaan 5 years ago! The bride and groom were both 18 years old and had grown up in the church.

We arrived early (kawadja/foreigner) time so we went to visit and pray with each of them before the ceremony.

I kept thinking to myself, "Where are we??!!" The wedding was full of western flavor -
- the bride wore a white dress and carried a bouquet of flowers down the aisle to a tune played on recorders (flutes)
- the father of the bride prayed over the couple before the vows
- they said vows to each other
- they had a receiving line after the service so everyone could greet and congratulate the new Mr. and Mrs. 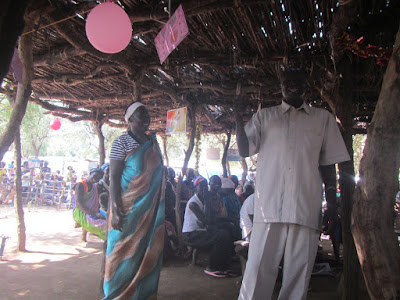 The pastor who gave a short sermon had several couples get up and share with the church how they kept their love alive over the years - again another thing I've never seen in South Sudan before! The couple above was the former commissioner of the area and his wife who are well loved and respected in the community. Then they asked Eli and I to share because they declared that Kawadja marriages don't have fights or trouble. Well, we put that lie to rest and shared a few of our "tips" in our marriage. As you can see with my blushing face, Eli had everyone roaring with laughter. 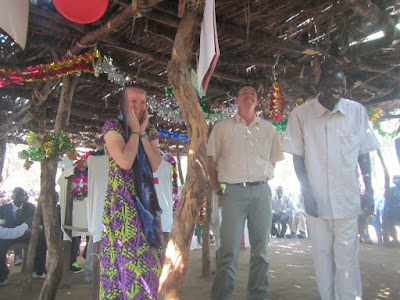 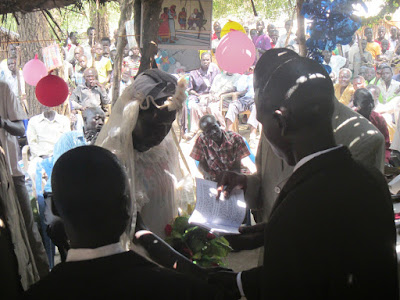 The Ministry of Presence

This week the Lord reminded me of the power and sweetness of BEING with people. A week ago I went to visit a few of our friends from the Uduk tribe in their camp and was invited to come back the following day for a double birthday party. The next day we enjoyed an afternoon of singing, gift giving and eating with our friends.


The family we celebrated with are good friends of ours from Melut days. Yoel and his wife Miriam were students at Gideon Theological College. Yoel was such a bright student that we encouraged him on to further studies, helping him to Ghana for seminary. He has been in Ghana all year while his wife and 6 children are here in Doro. Since this family is dear to our hearts, we enjoy checking in with them every now and then. 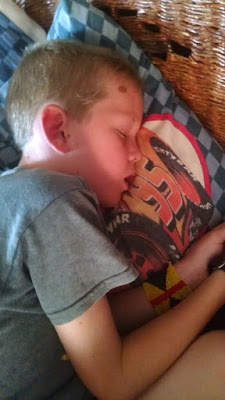 Later in the week, sickness hit our family in different ways. On Tuesday Joshua came down with a high fever, sore throat and headache that kept him in bed for a few days. On Wednesday Evan fell from a swing during recess and hurt his wrist. We are so thankful that it was only a sprain and not a break, but we're keeping an eye on it. I have also been battling a crazy leg ulcer that I think began as a spider bite but has now lasted 3 weeks! Besides sickness we also had a close encounter with a scorpion (but God protected Josh from its sting) and baby spider infestation in Evan's bed!

On Saturday, with most of us healing up, I got a phone call from my friend Miriam who we'd just visited the previous weekend. She said she was in the town hospital and in a terrible amount of pain. I waited for Eli to come home from his class and then drove to see her. 10 minutes after I arrived, a doctor did an ultrasound on her abdomen and found a cyst - 9 cm in diameter! She was in so much pain, the surgeon decided to take her right into surgery. I prayed with her and waited outside the theater with her oldest daughter and 3 sisters. Half way through the surgery, one of the nurses poked her head out of the door and motioned for me to come. I was confused but went ahead. Inside the door, the nurse asked me to put on some boots as she put scrubs and a cap on me. She said the surgeon wanted me to see something! At this point, I was getting nervous because I really don't do well looking at the insides of people! I tentatively walked into the theater and the doctor motioned me over to get a look at the size of the mass. It was huge! He saved her life that afternoon because the growth had actually wrapped around another organ and was cutting off circulation.

When I went back to wait outside, Miriam's daughter and sisters were anxious to hear why I'd been called in and I explained what I'd seen and we all thanked God together for the timing of having her surgery. Her life has been preserved...again. Three years ago almost to the month, I wrote on our blog about how God saved Miriam's life during childbirth. I was right there with her when we thought we'd lost her in 2013 and it was precious that I got to be there with her again during another scary, life-threatening illness on Saturday.

Thankfully Miriam is doing well. We went back to the hospital as a family to visit her yesterday afternoon and it is obvious that she is free from the pain she's been dealing with for so long. Come to find out, she's been having this severe abdominal pain off and on for more than 3 years! No wonder the mass had grown so big!

During the 5 hours I spent in the town hospital with my friend Miriam, I realized what a powerful ministry it is just to BE with people. Not only did I get to pray with and encourage my friend Miriam and her family but I also got to sit and pray with several other sick women and a few children that afternoon. It's amazing what a little hug, a prayer and a smile can do for someone who is suffering.

This was a good reminder for me. I believe it's easy for missionaries to get caught up in our work and what we're doing when really it's about being with the people. I'm thankful God plucked me from South Carolina and placed me among Sudanese refugees to be present with them as they face life's challenges and trials. Together we can fix our eyes on Jesus and remember the hope we have in Him.
Posted by Faders at 11:21 AM 2 comments: