A Season of Teaching 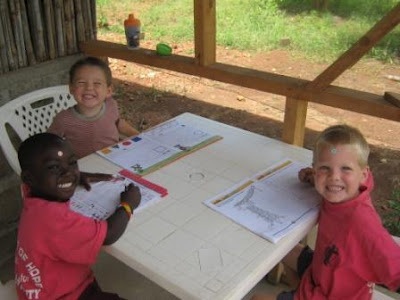 This week was Eli and my first week of teaching at the BELC in Yabus (Basic Education Learning Center). Eli is teaching English and Bible and I'm teaching Math. So far we're both really enjoying this new role. Our students are great and it's fun to be back in the classroom again. Another teaching role I have is with Isaac, Evan, and Praise. Praise is our teammate's son and spends most of the daylight hours at our house. Even with my two hour math class every morning, I am determined to keep homeschooling my boys as priority. So while Joshua takes his morning nap, the boys and I "do school". I took these great pictures today and as I look through them again, my heart swells with love and thanks. What a blessing these little boys are to me. And I'm privleged to be training them up to be godly men. 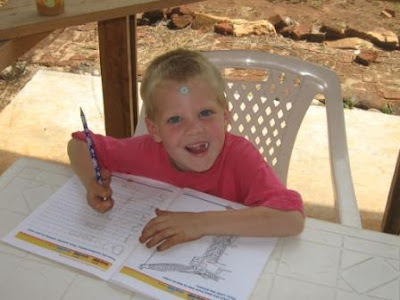 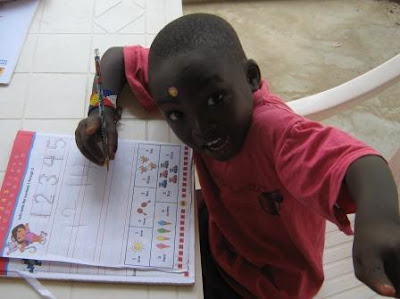 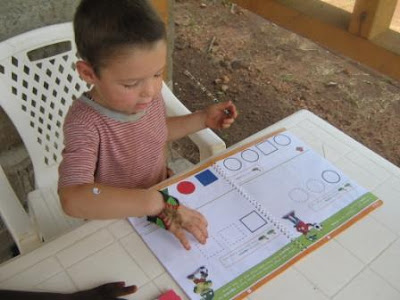 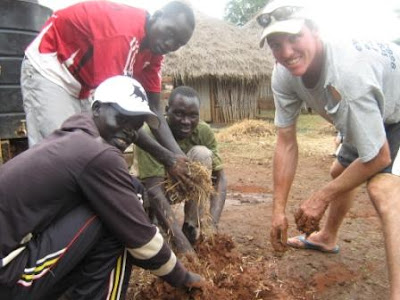 I just had to post a blog about one of the many creative projects Eli did last week. He researched mud/clay "rocket stoves" on the Internet: a very easy, cheap, efficient way to cook. So he decided to build one as an experiment with some of his friends and if it worked, get people in Yabus building and using them. It meant a morning full of mixing mud, patting mud, and molding a practical piece of pottery. 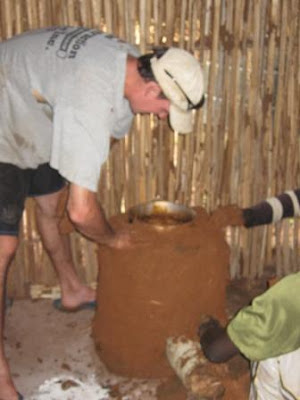 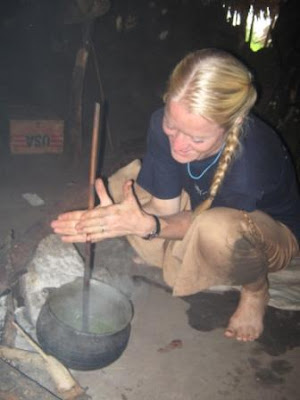 Yesterday our family went to visit a dear couple in Gondolo, a Ganza village about 4 km from Yabus. Gideon is blind but is a beautiful musician and leads the music in the Gondolo church. His wife Rhoda has a misfigured hand so she has to do everything with one hand. They have twins - a girl and a boy. The girl's name is Inia and the boy's name is Inias. They're a wonderful family.

When we arrived Eli and the boys sat on a mat in one of the huts while I joined the women in the cooking hut. The cooking hut is always full of intense smoke so my eyes were burning the whole time. But I enjoyed helping them cook the meal. First we made tea and served the men. Then we made "asida" which is made of sorghum flour and water into the consistency of playdough. We made okra soup to go with it. They cook their okra by whisking it with a branch (like a wire whisk) until it turns into a green slimy soup. It doesn't look appealing but it's very tasty and I acutally crave it sometimes!
After dinner, I helped roast the coffee beans, then pound them along with dried ginger, and brewed the coffee in their special clay "jebuna" pot. We served the men in their hut and we ladies stayed in the kitchen and each drank at least three cups.
Meanwhile the boys did great. They played happily outside with their crazy dog named "zuruf" which means hunger in their language. The dog lived up to its name as it was all skin and bones. We drove home just as it was getting dark and later, even after my bath, I remarked to Eli, that my hair still smelled like campfire smoke. That's when I realized...I'm becoming a Sudanese woman. 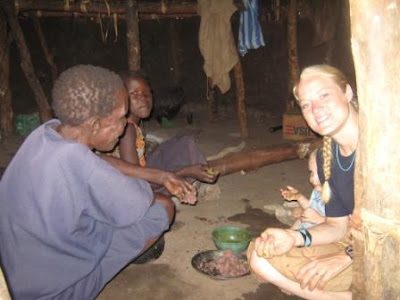 Eating and enjoying the finished product: asida and bamia (sorghum and okra)
Posted by Faders at 3:33 PM 1 comment:

A much better week

After several weeks of sickness running through our family, this week has been a relief in so many ways. Not only do we all feel better, but we've been able to get back to normal activities. Personally, I, Bethany, was getting stir crazy.
On Monday morning I decided this week was going to be different. So I went to greet my neighbor friends and ended up staying to grind sorghum on the rocks with them for a while (my back and arm muscles were sore the next day!) In the afternoon Joshua and I trekked through the slippery mud to visit some of our Uduk friends. I drank tea and coffee and then ate 2 dinners - one at Hisi's house and one at Wako's house. By the time I got home, it was getting dark, Joshua and I were both covered in mud, and we were stuffed with food!
Tuesday's highlight was going over to visit a friend named Elizabeth who just had a baby girl. I took her some goat meat I bought for her in the market and stayed for some tea and coffee. She proudly announced that they had named their new little girl, Bethany. Wow, another Bethany in Yabus!
Yesterday was our teammate Lori's birthday. The kids and I colored some birthday signs and wrapped a small gift to take to her. Later I baked a yellow cake, made tortillas, and our team enjoyed a yummy dinner together, complete with cake and candles.
Today my highlight was four wheeling through the mud to Gondolo. Gondolo is a Ganza village 4 km out of Yabus. Lori has been learning to speak Ganza and focusing her ministry with the Ganza people. They've built her her own house so I was tagging along to help move some stuff to her new house. What a ride! I wish I had taken my camera so you could better see what it was like. Since we've had some good rains lately, and the dirt is what we call "cotton soil" so it gets really mucky when wet. Lori and I (plus a mattress, a water jerrican, and a full action packer trunk) were sliding around on the path, splashing mud up into our hair and splattering our arms with muddy water. We couldn't help but laugh at ourselves. To us, it was just a ride to Gondolo, but we know people in the States would pay a lot of money to go four wheeling on a quad bike through tall grass and mud in the middle of nowhere.
I came home on my own and ended up getting the quad bike stuck in a deep rut. I had to run back to the village to find some strong men. When I entered the first house I got to, there were three good men: two of them I knew, one of them being the chief of the village. Of course I had to sit and chat for a while and then I explained my predicament and they excitedly agreed to help me. I was wondering how it would work out because they smelled strongly of alcohol. But they did a great job and once we had finally pulled the quad bike out of the rut and to the top of the hill, there was a lot of cheering, high fives, and me praising their strength and power!
I arrived home muddy from head to toe but so invigorated from my adventurous journey to Gondolo.
It's been a much more eventful week and I've enjoyed it immensely so far.
Posted by Faders at 7:56 PM 2 comments:

Since Eli returned from his trip in Ganza land, our family has been sick with one thing or another. It started with Isaac and Eli getting high fevers. Eli was only sick for the weekend but Isaac ended up being down for most of last week. Evan had some bowel issues all last week and then over this past weekend Joshua and I came down with the flu. I've been laying low all week and thankfully Eli's been around to help out with the kids.
I just wanted to explain why you haven't heard from us in a while and I'm also asking you to pray for our family's health.
Posted by Faders at 2:51 PM 5 comments:

It is hard to describe experiences which are brand new. Pictures do a good job so enjoy the many pictures we took. We learned a lot. First of all, I am glad we brought the donkey. Second, our water filter did not put out the 5 liters per hour that it boasted. Third, the girls we went with put us men to shame. They did a great job walking the 80 kilometers, cooking bush style over a fire, and sleeping in a tent each night.


We stayed in several villages and walked straight through many others. The Ganza people are not many, probably around 1,600 by our estimates. There is a complete lack of schools, government presence, clinics, or clean water. However, we were enthusiastically greeted each place we went, sometimes with a double take, as not every day brings 4 white people on foot to their village.


The chiefs were helpful in letting us know how many people lived in the area, what their needs were, and that we were welcome to come back. 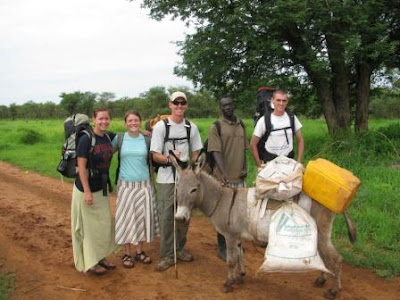 Setting off the first day. Our donkey did so well. Ahhh, the eagerness of the ignorant! 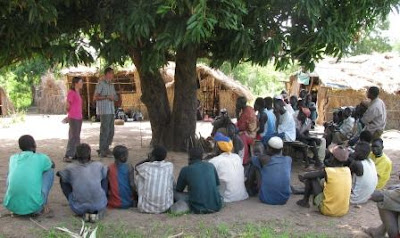 We would arrive in the village and ask to talk with everyone in the morning. Lori would speak in Ganza as she has been studying it for a few months. I would speak in Arabic and then she or another of our Sudanese colleagues would translate into Ganza. 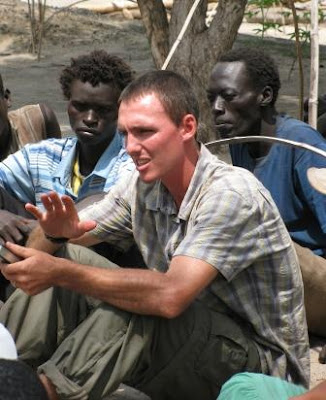 I got to share a little bit out of scripture from Creation. We asked for the Ganza creation story and then gave them the one from the Bible. It was a very interesting time. 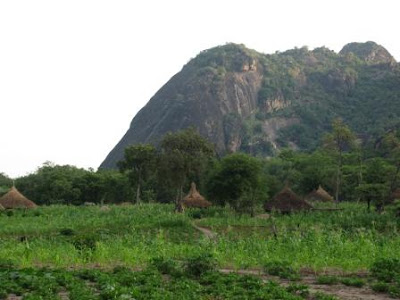 One of the villages, Dugubele, is placed right next to some beautiful rock formations. 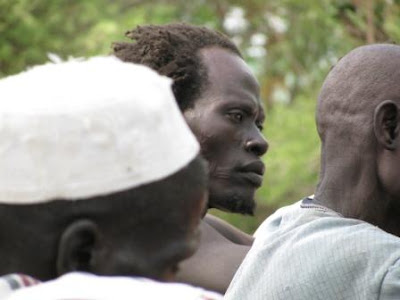 I read books about witchdoctors and they always looked the same. They always wore horrific masks made from hair, bone, and horn. They were dancing or chanting or something like that. Meet Gusmala. He is a witchdoctor who listened quietly and is very interested in learning more. 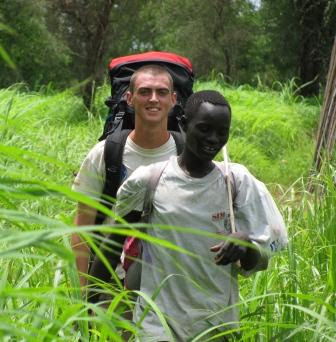 Peter and Samson happily walking through the bush. The Sudanese can keep up an incredible pace when walking. I am glad the trip was only four days long. 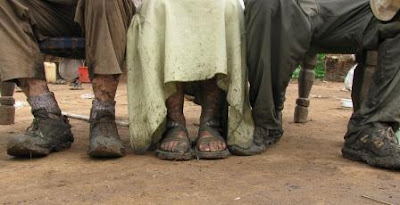 Does this picture even need a caption?
Posted by Faders at 8:27 PM 2 comments: