So Thankful for Jehovah Jireh, the Great Provider

For the past few months Eli and I have been in awe of God's provision for our family here in Sudan. Each month as we get our donor report which shows us our support amount and who's giving, we have been amazed to see that each month we are 100% supported. This is so key especially as we prepare for a new transition and move to a new assignment. Unfortunately Sudan and South Sudan are very expensive places to travel in and out of and we have to bring most of our supplies and food in with us. We are so blessed to NOT have to worry about finances. Thank you Brothers and Sisters!
Posted by Faders at 12:04 PM 1 comment:

We love our team! 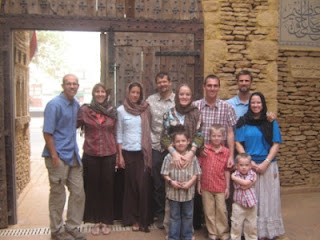 Introducing... our Khartoum team - we had a great night celebrating Jeff's birthday at a Lebanese Restaurant. 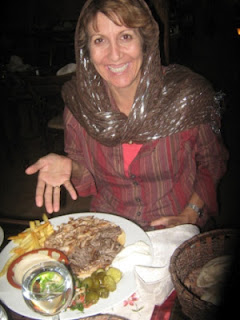 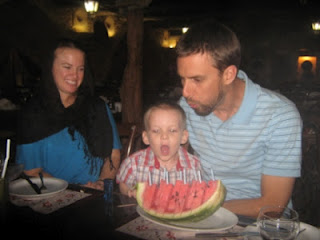 The waiters brought us watermelon for dessert so we put candles in it and sang Happy Birthday. Jeff had some help blowing out the candles. :)
Posted by Faders at 8:59 PM 2 comments:

What are we up to?

Sorry it's been a while since we updated you. It seems like the past few weeks have been especially busy and stressful. We are now in the last 2 months of our time of language study here in Khartoum. We just finished Book 2/Level 2 and have been reviewing and studying for our big test next week. We will have 2 written tests and one 30-minute oral exam. This will be our first time to be tested since we've been studying Arabic. I think it will be good to see how much we really know. 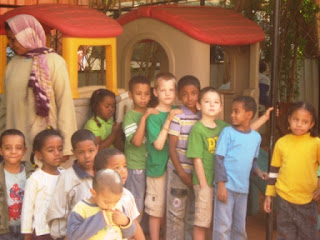 The boys continue to do well at school. They have only one more month of both Arabic school and homeschool. In April we'll pack up our Khartoum household, fly to Kenya for a conference, spend the month of May in the States for Eli's brother's wedding and return to South Sudan in early June.
Posted by Faders at 12:48 PM 2 comments:

I've never really thought about what we do with all the heads that belong to our hamburgers, steaks, and fillets.  Next time you take a bite, ponder that.
I did, however, find one creative use while camping in the desert north of Khartoum, Sudan.  We were driving alongside the Nile where many people have put their farms and were suprised to find a very carefully constructed "Cowcrow".  Gross and Functional all at the same time. 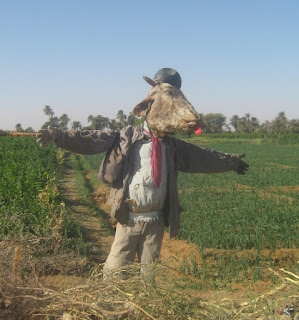 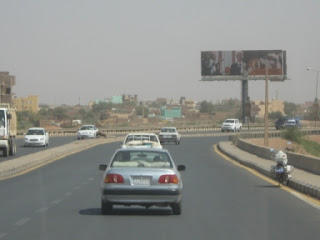 This weekend we left the great city of Khartoum for a bit of adventure in the desert. We and about 15 other families ventured 3 hours out of the city to camp and explore. 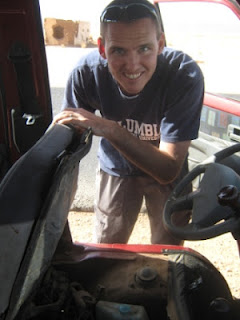 Just a little ways out of the city we discoverd the engine of the amjad/van was getting hot. We learned that it doesn't drive so well at faster speeds for longer times. :) Our driving caravan was kind to slow down and take a few "cool down" breaks with us. We were also stopped by the police and told that amjads were not allowed out of city limits because they tip easily at high speeds. This was one of those moments I was so thankful Eli knew Arabic so he could understand what the police were saying and explain that we didn't know about this rule. We still had to pay for the traffic violation but at least we can learn from our mistakes. 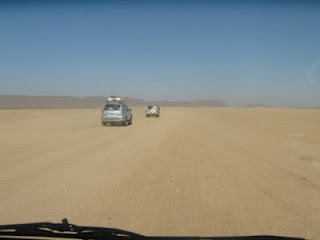 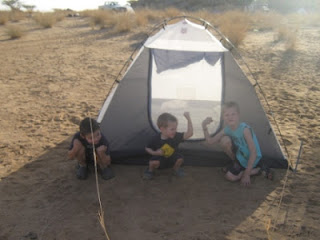 Eli had to go back to the police checkpoint to retrieve his license which he left behind and while he was away the boys and I put up our tent and set up camp. We were very proud of ourselves! 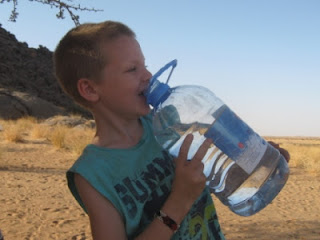 After setting up camp, Isaac was very very thirsty - check out the size of THAT water bottle! 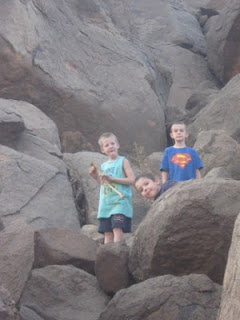 The boys were delighted to have tons of exploring to do with their friend Caleb. Here Isaac is holding a dried up goat leg. Yuck! 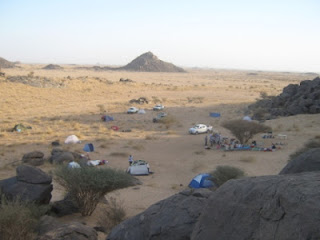 This was a view of our campsite from high up on the rocks. I ventured up with a bunch of kids. 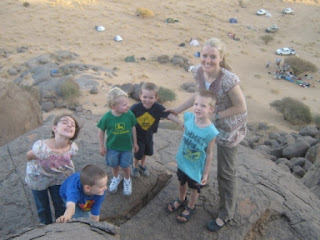 As you can see I was a little nervous on the edge of the rock with all these little ones. I was glad when we started our descent. :) 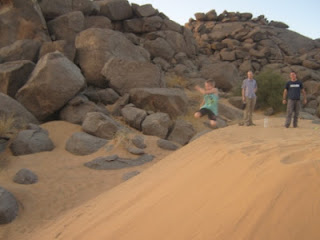 We found a great sand dune for jumping and rolling down. We had contests on who could get the most air. Isaac was a champ! 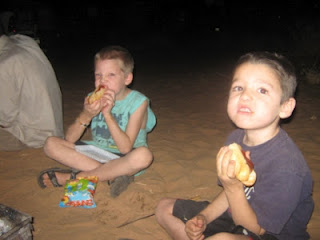 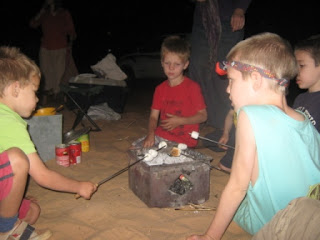 The boys even got to roast marshmallows 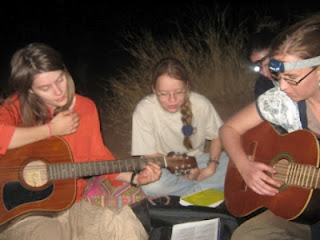 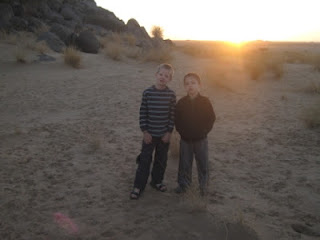 Isaac, Evan, and I woke up before Eli and Josh so we decided to go for a walk/hike to see the sunrise. It was incredible and will be an unforgettable memory for us! 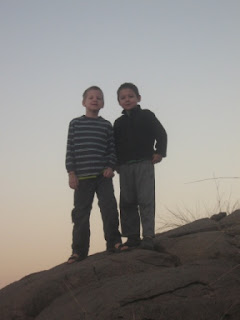 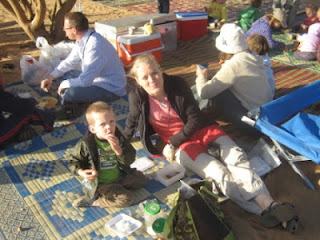 After our sunrise adventure we came back with a large appetite for a breakfast of fruit, muffins, and other delightful things shared by other campers. 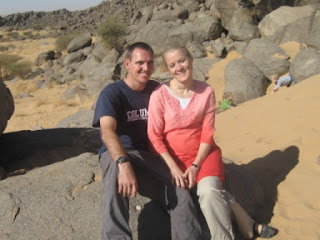 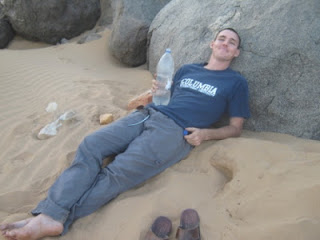 Eli relaxes in the sand 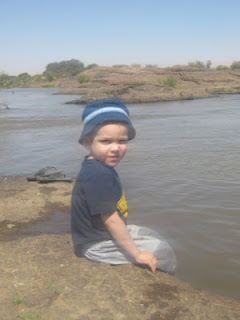 The next morning we packed up camp and headed to the 6th Cataract - a place where there are multiple whirlpools in the Nile River. We found a nice cove for swimming - with no whirlpools!!! :) 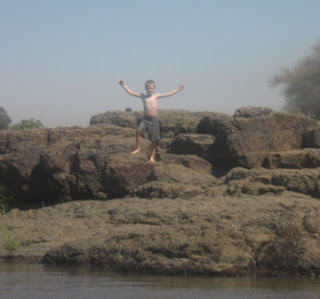 Evan on our boat ride 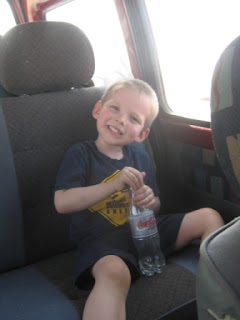 Josh was a happy camper 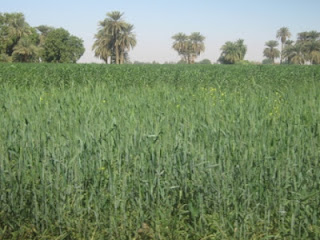 An oasis near the Nile River - this was an incredible sight after driving through the desert for a few days! 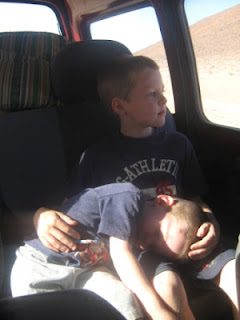 Everyone was tired and dusty when we finally got home (after stopping multiple times for the car to cool down) But we had such an amazing weekend in the desert - a one of a kind family excursion!!!
Posted by Faders at 8:57 PM 5 comments:

In homeschool today, one of Isaac's assigments (we've been reading Dr. Seuss' "Green Eggs and Ham" this week) was to write a similar poem after choosing a food that he doesn't like and writing about it in the same fashion. He chose green okra soup which is a staple food in Sudan. It's slimy, green goo and not pleasant to the eyes or throat. :) He did a great job putting a poem together. I thought it sounded like a fun idea so I wrote my own version: